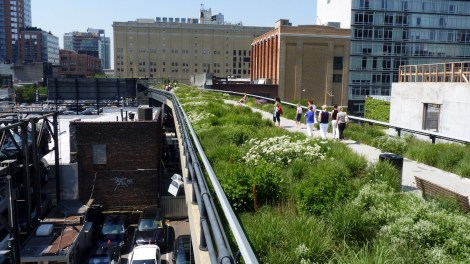 With over 3 million tags on Instagram, #succulents have taken hold of the millennial imagination.  Images of succulents and other houseplants are ubiquitous on social media and in lifestyle magazines and are readily found in coffee shops, retailers, and in homes.  The 2010s are the era of the houseplant.  When walking through New York City succulents dot the scenery, acting as fragments of green space in an otherwise jarring built landscape.  As an environmentalist, I welcome these plant additions to the cityscape but question their appeal and significance to the average New Yorker.  Does the commodification of nature indicate a collective dedication to solving environmental issues, or do these plants simply act as a respite in a place being made increasing unnatural by climate change?

As plants become a trend then begins their wider commodification and with it an inflated price tag. New Yorkers can fill their apartments with Ivy, Snake Plants, and Violets and forget that they live across the street from a factory.  Green inside, concrete outside.  If you can afford to, you can transform your apartment into a verdant escape.  Industrial neighborhoods become more desirable living spaces when the apartment itself can become a green oasis.  I have found that millennial plant stores and plant-filled apartments often parallel the path of gentrification that is consuming the city’s many neighborhoods. There is an obvious irony in plants becoming a trend in the 2010’s, as our landscapes become more unsuitable to natural life, plants become the new luxury item.  Coveted for their infinite colors and shapes, plants will only become more exclusive as climate change decimates many species and reduces the biodiversity of this life form.

The millennial plant obsession exemplifies a dissonance between caring about nature and caring about the fate of nature.  Abstracting ourselves from the environmental realities of our neighborhoods leads to a culture of environmental apathy.  New York City is plagued by several growing environmental problems; an inadequate waste system, aging infrastructure, and the foreboding reality that much of the city will be submerged in the wake of rising sea levels.  When asked, the majority of New Yorkers would consider themselves committed to environmental justice, but these beliefs are not translated into their everyday actions and how they interface with their natural environment.  Filling one’s apartment with orchids and recycling bottles is not enough when the city’s canals gleam with oil and disenfranchised residents are forced to live in neighborhoods that are increasingly more barren and dirty.  As New Yorkers we are heading to a collective amnesia from the environmental realities of our city.

This façade of environmentalism is also being carried out by the city itself through policies that perpetuate environmental racism and allocate out green spaces to the privileged few.  Wealthy neighborhoods routinely receive more environmental services than their counterparts, including a public space recycling program only found along a few choice streets and parks.  Zoning that favors gentrification pushes poorer residents closer and closer to polluted areas.  These residents are then asked to make green choices, such as joining a community garden or limiting their use of plastic bags.  Making these small concessions does little to quell the wave of climate change in our carbon based world, and is especially trivial to those living adjacent to highways or hazardous waste sites.

Trends reflect our society’s values, and the current fixation on plants reflects a penchant for appearances over environmental action.  Our current relationship with plants does not need to be so vapid; we could easily use this life form as both an aesthetic fixture and a means of education as to why preserving the environment is so valuable.  The current plant trend could serve as a call to action for more sustainable practices across urban life.  New Yorkers namely need to understand the power of organizing, and demand systemic change that reflects our want for a green city.  For example, New Yorkers could demand that the electricity running our subway come exclusively through sustainable sources, as opposed to simply believing the purported green effect of using public transportation.  Similarly, New Yorkers could demand that all of our waste be processed in state, to curb the mass of carbon being put in the atmosphere by driving our garbage up to 600 miles away to be processed.  We need to create policies that create the green city that our houseplants evoke.  We need a city that can support a green outdoor space, a space that contains clean air and water, promotes environmental justice, and mitigates climate changes through systemically sustainable practices.