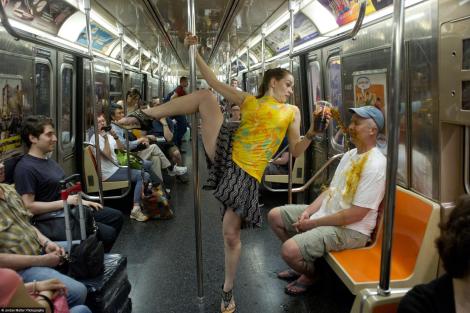 I was talking to my coworker about the New York phenomenon in which subway riders leave an unreasonable berth around a benign object, like a newspaper or a plastic bag, that’s resting on a seat on a crowded train.

It’s probably because of the subway horrors we’ve seen, like the used condom tied to an F train pole, or the dead crab taking up a seat on the B train, hitching his way back to Coney Island.

But apart from that, I think it says a lot about New Yorkers that no one thinks to pick up the bag, or (more radically), remove it from the train and put it in the trash, preferring instead to stand and suffocate rather than risk disposing of a (potentially) contaminated bag.

Despite all that the subway does for us—ferrying us back and forth 24 hours a day, disappointing us often but failing us never—we don’t seem to have any sense of ownership over it at all. We feel like it’s someone else’s responsibility, not ours, to keep it clean.

It got me thinking about a weekly ritual at my little hippie high school, which we called, quaintly, “Hands to Work.” The name to me, in retrospect, conjures up images of something faintly communist, or even of the strapping Hitler youth whistling their way through their chores in “The Triumph of The Will.”

During this 20 minute period, each member of the school was responsible for performing a small chore—from collecting and sorting recycling, to sweeping, to tidying various areas around the campus.

One year, I got the easy task of fanning out the newspapers on the table in front of the receptionist’s office.

During this time you’d see groups of students merrily scurrying around with bins, dustpans, and brooms. The school called it stewardship, and they took it quite seriously. We had a caretaker, but we were never meant to assume that it was his job to clean up after us. We were instructed to greet him gratefully, and revere him for taking care of the space we all shared.

In 7th grade I won a french contest and I was in the newspaper. I was sitting in french class the day the paper came out when the headmaster of the school knocked on the door and asked to see me outside. I was pleased, as I imagined he was going to congratulate me on my achievement.

Apparently, while eating my pretzels during our 15 minute snack break, I had left a trail of crumbs behind, and someone had somehow attributed the crumbs to me. The headmaster gave me a dustpan and brush.

And as my classmates recited their conjugations in the next room, I knelt on the floor and swept my crumbs into the dustpan, under his watchful eye.

I wonder if this sounds cruel and unusual to some people. I was curious if students helped clean at other schools, and was pleased to find an NPR article on the subject. The article profiles The Armadillo Technical Institute, a school in Portland (obviously) which employs no janitors, instead relying on students to keep the place clean. 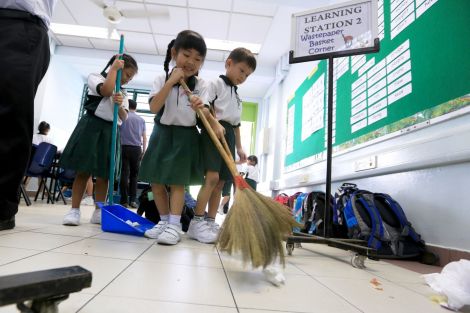 Apparently, when Newt Gingrich ran for president, he proposed the idea of cutting school costs by firing janitors and using students to clean schools. When you think of it as free child labor, the idea does not sit so well. But, as the executive director of the Armadillo Institute  says, “it’s easy to encourage students to respect their environment when they’re the ones responsible for preserving it.” But, as the article notes, there really “isn’t anything radical about asking students to clean up after themselves.” In Japan, the author explains, the practice of students cleaning in school is commonplace. One english teacher working in Japan explains:  “school is not just for learning from a book…It’s about learning how to become a member of society and taking responsibility for oneself.”

This more practical, holistic approach to education is one that we should take a cue from. You can imagine the American parents who would clutch their pearls at the prospect of their child using classroom time to mop up the hallway. “I don’t want my tax dollars going towards teaching my kid to sort the recycling,” they’d say. Well, I’d want to respond, you’re currently spending your tax dollars teaching them what a parallelogram is, a piece of knowledge that is infinitely less useful than knowing how to handle your recycling —both for the environment, and for your child’s development into a functional human. The idea that our schools don’t prepare us for the logistical trappings of “real life”, like doing our taxes, has recently become a meme. The fact that our country lags behind all other developed nations should indicate to us that we might be stressing the wrong things. We care deeply about how our test scores look on paper, and less so about the kind of humans our schools are helping to create, and release upon the world.

Perhaps cultivating a sense of stewardship is one solution. When students feel responsible for their environment, and in turn, the environment of their peers, they learn the more invisible lessons of empathy and care. Participating in taking care of a shared space means taking responsibility for the comfort and well-being of both yourself and others. As much as we falter in measures of book smarts, perhaps improving these emotional metrics will go further towards bettering our society, especially in under a political regime bent on propagating hate and refusing accountability. I was held accountable for scattering crumbs across a public space, and leaving them there, and that made a difference. 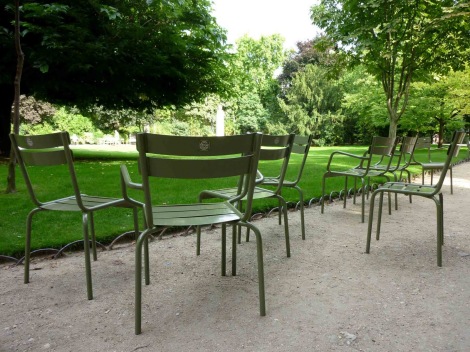 The idea of ownership got me thinking about the famous chairs in the Luxembourg Gardens in Paris. Urbanist William H. Whyte made the revolutionary discovery that people prefer movable chairs in public spaces to unmovable nailed-down benches. The idea seemed radical and ridiculous, because cities felt certain that park-goers would steal the chairs. But, when they tested his theory, they didn’t. The idea of being able to move your own chair as you see fit invites you to interact with the park in a fluid way, and conjures up a feeling of ownership over the space. With a movable chair a park feels like a communal outdoor living room, where you can feel comfortable enough to sit on one chair and prop your feet up on another. At the Luxembourg Gardens, groups of chairs are arranged in circles full of chattering teens, and some are nestled up against the fountains where people dip their toes. The movable chairs cultivate a feeling of both freedom and care. Accountability to the other-chair enjoyers keeps people from stealing or damaging the chairs. The sense of trust innate in the unchained chairs is the very thing that keeps them from leaving the park.

It’s the simplest things that can cultivate caring. The hellfire spawned by Trump’s ascent to the throne has roused a new feeling of caring in young people. It’s not cool to not care anymore— we are far beyond IDGAF culture. We have to love and accept with aggression to fight the forces of hate and exclusion. We have to become stewards of our earth, our schools, and our public spaces when our government fails to. We have to divorce the idea that it’s someone else’s job to pick up after us, and confront the tides of apathy and ignorance with a movement of radical caring.

One response to “Not My Subway, Not My Problem: On Fighting Apathy and Reclaiming Ownership”